Away to my not. tab
I flew like a flash
Scrolled up from the bottom
And refreshed the cache

When what to my wondering
Eyes did appear
But a miniature AVI
Of some woman’s rear?

“Oh that one! And that too!
I don’t recall that tweet.
I must have been drunk…
Oh look, that one, too! Sweet!”

“From the top of my timeline,
To the tenth page of FavStar,
Retweet away, retweet away,
Star!”

Her eye selfies twinkled
Her dimples so filtered
And craft pictures signaled
She might be a quilter?

But I saw one last @
As she vanished from sight
“Happy Christmas to all
And to all a good night.”

I wrote this in real time over the course of a few hours this Christmas eve, and tweeted each stanza as I finished them. If you want to see the original tweets, just start at the end and scroll up.

Enjoy the holiday, everyone. Love each other.

The weekend is over, and I find that I didn’t write anything! Oh well. Here’s a best-of link: My Favorite Bass Line.

Returning from my morning walk
Standing on the cold, dark street
I glance at our room
The blinds are open
I see you there, moving
Just a blur behind the ripples and fog
But it warms me
Knowing it is you
Knowing it will always be you

A couple weeks ago I took you through the song We Three Kings, played five completely different ways. That was kind of fun, so I thought maybe I’d do that once more. This time, we’ll be looking at the song God Rest Ye Merry Gentlemen. As before, let’s start with my brother’s version as our point of reference. You can buy the tracks here. (Scroll to the bottom of the page.)

The song opens with a very straight, classic version of the melody. Next, the tuba comes in with a walking bass line. That means he is “walking” up and down the scales and arpeggios that go with the chord progression of the song. You often hear bass players do this (particularly upright double-bass players) in jazz. It’s much less common to hear a tuba doing a walking bass line, because it’s incredibly hard to play tuba continuously like that. Most players just don’t have the chops.

The second time through the melody, and you can hear they are swinging it now. Swinging is another jazz thing. When you play straight time, you divide each beat into two parts. But when you swing, you divide each into three parts and play the first and third (skipping the second). You can take any song, swing it, and it will sound a lot like jazz.

So that’s our reference point. Basically the melody is played three times, in a slightly different way each time.

Next up is a version from Roy Hargrove, on an absolutely excellent jazz Christmas album called A Merry Jazzmas. You can get the album here on iTunes.

The structure here is a classic head/solos/head (I cut off my sample partway through the solos, in deference to the musician’s copyrights, of course). The head is the melody of the piece. In most jazz music, you play that once or twice, then people solo for a while, and then you play the melody one more time. When you are watching live players soloing and you see one of the players point to his head, he means “Okay, that’s enough solos, let’s go back and play the head one more time.” Often the solos are played over the chord changes of the melody, but in this case they switch to a different progression.

Next up we have Loren Schoenberg on A Jazz Christmas: Hot Jazz for a Cool Night. Here’s the full album on iTunes.

Loren is a great tenor player but is actually more famous for writing liner notes. He even won a Grammy for them once. This version follows that same head/solos/head form, but here we have the chord progression (what we jazz musicians call “changes”) of the melody for the solos. These are more challenging to solo over than the standard progression Roy used in his version, and the guitar player (not sure who that is) is really struggling to come up with something lyric. Dude. Been there.

Next up, let’s hit a version from one of my very favorite holiday jazz albums, Merry Magic by Eric Reed. As usual, here’s the link to the full album on iTunes.

Eric is a piano player, but the instrument you hear primarily here is a vibraphone, played by Steve Nelson. The “vibes” are basically like a xylophone, except the bars you hit with mallets are made out of metal instead of wood. There are metal tubes of varying lengths suspended below the metal bars that act as a resonance chamber for each (lower notes have longer tubes, because they have longer wavelengths and hence need more distance to resonate). Inside each tube there is a baffle on a rod that is spun by a motor at the end of the vibraphone. Usually, there is a knob you can turn to adjust the speed. The baffle opens and closes the tube, giving a vibrato to the sound coming out. Hence the name vibraphone.

Before we leave that version, check out what happens at the end:

After a remarkably long pause, they start playing a little round (that’s where multiple instruments are playing the same thing, starting at different times). And then it devolves into what we call a “vamp.” That’s where the musicians are basically fooling around on a simple chord repetition. Like trading fours, except less structured than that. They take turns, play over each other, listen and respond.

So at the start of that little clip we had the bass playing the melody. Suppose you do that as the head. Just have the bass play the melody and have some other instruments play crazy shit that is totally orthogonal. Would that be a good idea? Wynton thought so on Crescent City Christmas Card. Here’s the full album on iTunes.

Again, we have the head/solo/head structure. But the head and the solos have basically nothing to do with each other. The tempo, changes, everything are different. (And thank goodness, because although that bass melody was interesting, that tempo and structure would have been unlistenable for the whole song.)

So as your parting gift, I’ll give you a great version from Straight No Chaser. They switch up the time signature, doing this one in three instead of four like everyone else. Even though this is a vocal version, they still do the head/solo/head thing, although they keep the solo section really short.

Back when I was younger and could actually stay up late at night, I remember there was a thing they did on David Letterman’s Late Show (still on NBC, after Carson) called “Brush with Greatness.” Dave would go into the audience and people would tell lame stories about meeting someone famous. This is my brush with greatness story: Slammers with Bill Gates.

This poem came to me at 3am, the night before my sister-in-law’s wedding. It pretty much came to me intact, exactly as you read it. I grabbed my phone and quickly typed it in as a note. At the reception, I got the new bride alone for a minute and read it to her. It’s a poem about marriage. About my marriage. And I hope about all marriage. Impossible to Disentwine.

And yes, the “ball of chain” / “ball and chain” is totally on purpose. 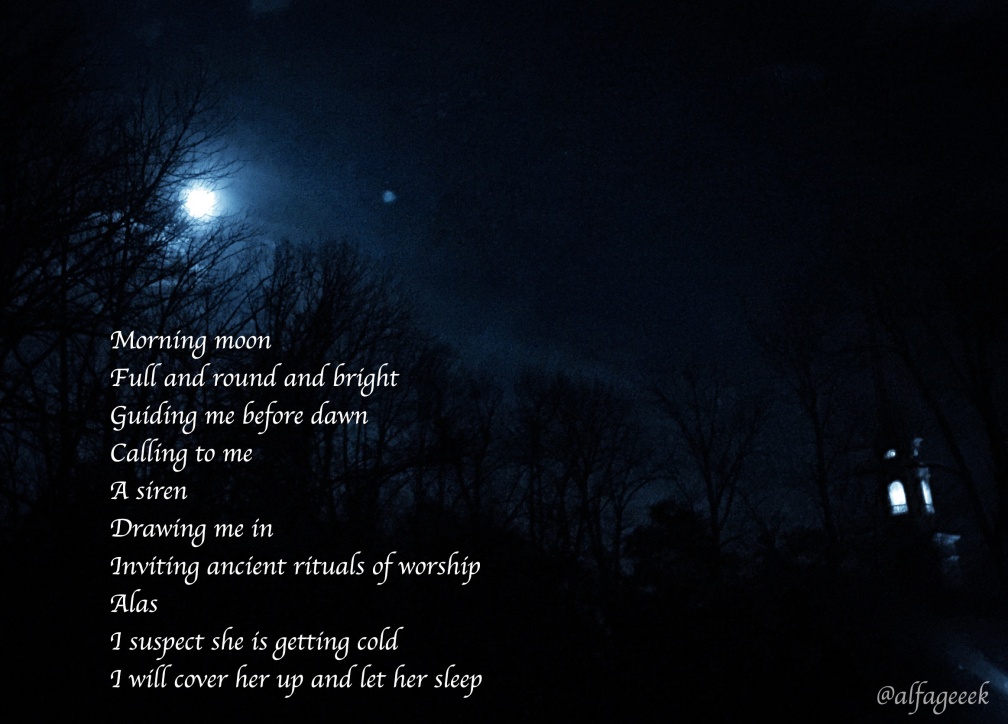 The way I choose my best-of’s is generally that one of my old posts comes up in conversation with someone online, and then I look at that old post, and think “yeah, that was okay; people should read that.” So this post is okay and you should read it: My Code. Note that it’s code as in “code of conduct” not code as in “check out this gnarly code I just wrote that rebalances a red black tree.” I know that with my posts, it could really go either way.

Keeping up with the theme of Convincing You Christmas Music Isn’t So Bad, I’m going to introduce you to a very clever version of Jolly Old Saint Nicholas that my brother put together. You can buy the track here for a buck. (Scroll to the bottom)

I’ve introduced you to the idea of quoting songs in the past. There, I mentioned the piece that we are listening to here. My brother is a great musician and one of his skills is putting together arrangements. He’s been doing this since he was a kid. I remember when he was in high school, he would spend hours at the piano coming up with 6 part arrangements of popular songs for his group to play. He would be so focused, for so long, that he wrecked his stomach and basically drank Pepto Bismol like most kids drink soda. He was a mess. But he was really good.

Anyway, this song starts off as Pachelbel’s Canon in D. That’s what going on for the first 20 seconds.

Then he overlays trumpets (he’s playing one) with the melody of Jolly Old Saint Nicholas.

At 45 seconds, the trombone comes in with the old Burger King ad “Hold the pickles, hold the lettuce, special orders don’t upset us…” Remember that? If you missed it, don’t worry. It’ll be back.

At 1:08 the trumpet comes in with a lyric line that sounded really familiar, but I just couldn’t place. I went back and listened to the Canon and it was similar, but not quite the same. So I just called my brother to get the scoop. Turns out he was kind of improvising the Canon. He only vaguely remembered the melody, and what he remembered didn’t quite work, so he invented this line. I love this line in the song, partly because the trumpet has such as great tone.

At 1:58 the trombone goes in for another Whopper. The lead trumpet starts the screwed up Canon melody. And the other trumpets come back with St Nick, and we basically have almost everything except Puff going on at the same time.

I asked him about the genesis of this song, and it turns out that riffing on Pachelbel’s Canon is kind of a thing. In fact, here’s a tremendously funny video of a guy pointing out all the Pachelbel quotes in popular music. Bear with it through the first couple minutes, because by the end it’s an absolute riot.